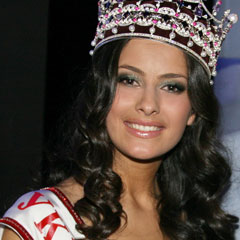 Miss Ukraine 2007. How did it happen? Unfold the full story with photos and videos. 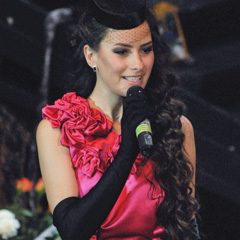 Ask Lika a question that you have in mind or browse through already answered questions.

Find out the latest news about Lika Roman and if she is in town near you.

Lika’s father Viktor, is a musician, teaching the guitar; her mother Svetlana, is a professional overclothes designer. When Lika was eight years old, she and her mother started going to an evangelical church. It was there that her Christian values were formed. The young lady studied in Uzhgorod school #19. In her spare time Lika likes to play the piano and ski.

Many girls dream about participating in beauty competitions, but I never did. I never had a goal to win the competition. The dream of my childhood was to change the world by changing the life of at least one person.

At the age of 17 I was noticed by talent agencies that offered me profitable contracts. But realizing that the modeling business nowadays is oriented more towards undressing a girl rather then dressing her, I refused all those contracts.

I started a course on international relations in a university, and having graduated the college of beauty culture, I then began to work in a beauty salon. A lot of people wondered why I would deny such profitable offers and supposed that I wouldn't go far with my moral principles, while becoming a mousy person. But I believed that my destiny was in God's hands, and I prayed for His will to be done in my life. 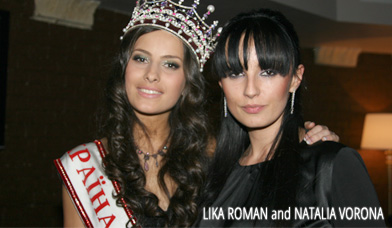 One day a young lady with beautiful long hair came to our salon, and her name was Natalia Vorona. I had never met her before but I liked her very much. While I was working with her hair we had a little conversation. Natalia asked me why I wasn't in the modeling business and I answered that it contradicted my moral standards. After some time had passed, she called me and offered for me to take part in the National Beauty Competition. I was ready to refuse, but one phrase made me pause to think. Natalia said: “I could have found many girls with outer beauty but I see the inner beauty about you too. I want you to show it in the competition." In that moment when she said this I felt something special and life-changing. I prayed and decided to participate in the competition. But, of course, like many other people in our country, I had a huge bias against such competitions. I heard that it was common practice that some magnates' daughters would become the winners. I prayed for God's will to be done because I always believed and knew that God the Creator of everything is more powerful and authoritative than the richest man on earth. 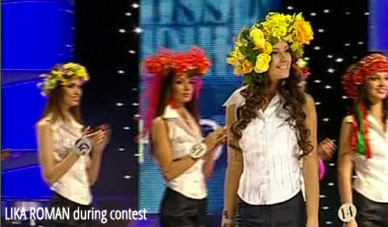 So I arrived for the preparatory training. Almost all the contestants were professional models; some of them had already been in famous fashion shows in Milano and Paris. And, of course, I began to stand out considering their background because I had never faced the need of learning the secrets of defile. This is when my most difficult days of preparation for the competition began. the Competition's organizers and the jury were present on each try-out and it was questionable whether I could manage the program because we were preparing for the live transmission on one of the most high-rated TV channels. Besides, we were all expecting the visit of a special guest to Ukraine, Julia Morley (chairwoman of the beauty pageant) who was also to be one of the jury members. I felt downcast not only in the eyes of other people but in mine too. And then came that critical moment when I just went to my room, shut the door, lay down on the floor and started crying; I asked God why it all was so hard. At that very moment I felt that I was loved and appreciated by Him, the Creator of the whole universe, the designer with outstanding taste. He created me! After that time, I didn't care what other people would think of me, because I had already been appreciated by God. After that I rose to my feet, dried my eyes and asked one of the contestants Olia to teach me the secrets of defile. To my surprise, she agreed to help me. They say that there is no mutual support in such competitions and everyone tries to make a catch somewhere. But in my case it was different. 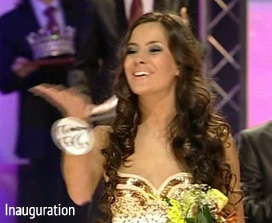 And at last the final came. We all were very excited. I didn't even know whether I could enter the semifinal. And suddenly during the first walking out when all the contestants were wearing the same clothes, Julia Morley, as I was told later, asked another jury member: “Who is that young woman number 23? She is radiating light, she is different." And finally when the votes had divided equally, the vote of Miss World Pageant chairman appeared to be deciding, and she casted it for me. At that moment when my name was pronounced, I didn't realize everything to the full extent, but was in great amazement from what the Lord had done in my life.

The moment that will last in my memory forever.

When I woke up next morning after the win, my phone was ringing off the hook; they called from television, radio, and newspapers. Everyone became interested in my way of life and my opinion concerning some things. I realized then, how cardinally my life had changed and what great responsibility God placed on me.

After all this, my every phrase or comment could influence the lives of thousands boys and girls. After winning the competition I moved from my native city Uzhgorod to Kiev. Most of my time I spend in travels because I take part in many charitable youth projects not only in Ukraine but in other countries as well.

I'm grateful to the Lord for changing my life in such a way!

For I know the plans I have for you, declares the LORD, plans to prosper you and not to harm you, plans to give you hope and a future. Then you will call upon Me and come and pray to Me, and I will listen to you. You will seek Me and find Me when you search for Me with all your heart.

Lika is now involved in various international activity, as she builds relations in the cultural and educational spheres. She gives lectures regarding moral and spiritual values in numerous educational institutions in Ukraine, Belarus, and America... She organizes and participates in various charity campaigns for orphans, street children, women and teenagers in penal colonies.

PUBLIC ACTIVITIES
- Received a State award for contributing to spiritual and cultural development of Ukraine
- Speaker at youth conferences on the issues of AIDS and other social problems
- Inducted as a member of the National Expert Commission on Protecting of Civic Morals
- Visited orphanages, child centers, juvenile prisons and women jails in Ukraine, Moldova and Belarus
- Secured sponsor support for many projects, children, and those with cancer
- Participated in a River Cleanup Project, attracted over 5,000 people
- Conducted and participated at public campaigns against drugs
- Invited to the President’s Office of Ukraine and presented with high acknowledgement of leading the nation by example of high moral living
- Gave an interview in a NY studio regarding Ukrainian young women issues in foreign countries
- Toured American schools in different states, conducted talk-shows on morals and AIDS, and gave interviews to many American TV and printed media
- Spoke at an international conference in Atlanta, Georgia on the influence of morals on society
- Visited many cities of Ukraine with charity events, concerts, and seminars
- Conducted 150 talk-shows for youth in universities around the world on the topics of: truth about love, relationships, AIDS, drugs, how to be successful without compromising, morals, true fundamental values, and a happy future
- Took part in a live and recorded TV programs, where she was standing-up for moral principals